Capitalism has come under fire in recent years, and the fact is that people often distort what the term actually means. Under our current system of capitalism, we have strong moral undercurrents that affect the purity of our judgments. As of this writing, the hot topic is the re-distribution of wealth. There are some senators who have argued that those who have earned money have no rights to keep it, when in fact pure capitalism contradicts this idea entirely.

Pure capitalism is motivated by selfishness, but it turns this baseless and morally repulsive human impulse into something that produces for the greater good. Capitalism is the most rational approach to the concept of building the modern society, as it enables everyone to produce the amount he or she sees as fit. 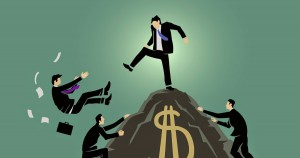 The human mind requires reason to function. It needs observable phenomenon, it makes rationalizations and judgments, and those impulses translate into action. That is the rational side, but the individual possesses a sense of self worth. A good example is interviewing for a job, where the prospective candidate comes into the interview with some idea of what he is already worth.

He will only choose a job that will fit those qualifications, maybe healthcare or a large salary, and refuse all others that fall short. Some call this being picky about employment, but it’s a form of self-preservation.

Capitalism, in its purest sense, functions on the same kind of rational impulses. Businesses want to innovate, compete and grow. Doing anything less would result in failure. Banks, for example, would set interest rates based on what the market would bear while remaining competitive with other banks, not setting rates on some arbitrary number set by the government.